Phyllis Maathius Hall’s grandfather Tammo Maathuis died in the 1918 flu epidemic in Ogden, Utah. He was a carpenter. Phyllis’s father, Cornelius Maathuis, was four years old when his father died. Cornelius’s mother, Dievertje was left a widow with 4 children — Mary (8), Henry (6), Cornelius (4) and Thomas (2). The entire family was very ill with the flu and were unable to attend Tammo’s funeral. Mary recalls she was so sick and her mother put a shawl around her and sent her out into the sun to talk. The sun was thought to be a “flu killer.” This photo of the Maathius family was probably taken in 1916.

After Tammo’s death, Dievertje took in washing and cleaned a bank and people’s homes to support her family, but it was too much for her and she contracted tuberculosis. The children were placed in a nursery. Dievertje came every visiting day for a few months and then spent a few years in sanitariums in Salt Lake and Roy Utah, and Denver, Colorado. The only time the children saw her was when the nursery matron or another kind soul would drive the children to see her when she was in Utah. In 1923 she was sent home from Denver as they could do nothing more for her. She died in November 1924. Below are the death certificates for Tammo and Dievertje. 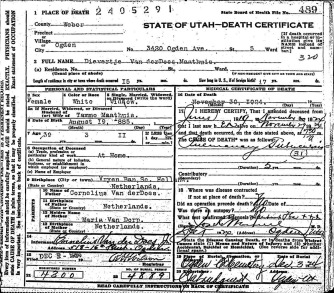 Cornelius stayed in the nursery until he reached 12 years old, when he was placed with a family in Uintah, Utah who wanted a small boy for company and to help with the farm chores. But he ran away a few weeks later to his grandparent’s home in Salt Lake because the family was abusive and would not let him attend school. He was in and out of the homes of relatives for the next few years. For a while he was staying with a non-relative but ran away because of an another abusive relationship.

As Cornelius’s daughter writes: “It was difficult to grow up as orphans in the 1920s.”

See below for life histories of Mary and Henry

Welcome to Bridging the Past. We help genealogists connect to their colonial New England ancestors by sharing with them information about the lives of their ancestors. What did they eat? What did they wear? What was a typical day like? Did my ancestor fight in a war? What was life like for that ancestor, and for the loved ones he left at home? Why did they move? Was it part of a larger movement? By answering these questions, and many more, you can bring your ancestors to life and feel closer to them. We design lectures to answer these questions and give genealogists the tools and resources to personally connect with their ancestors by fleshing out the lives of their ancestors so they are more than names, dates and places on a piece of paper. View all posts by bridgingthepast