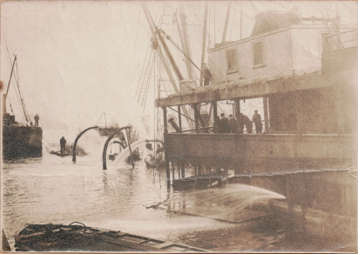 I was reading the introduction to A Fever of War and the following sentences caught my attention. “Influenza hospitalized 25 to 40 percent of the men in the U.S. Army training camps and killed almost thirty thousand of them before they could even go to France. Men carried the flu virus on board the troop ships and many soon fell ill, toxifying the ships as they crossed the Atlantic.” (1)

Clyde Pendleton was a gunner on the troop transport USS America. In mid-September 1918 they picked up soldiers in Boston, who brought the flu onboard with them. Over 1,000 of the men on board became sick with the flu during the Atlantic crossing. Fifty-five died. This is a picture of Clyde who at some point while on land caught the flu and was in the hospital. 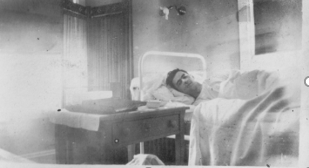 Upon the ship’s return to Hoboken, it was decided to fumigate the ship in an attempt to prevent another outbreak. The ship was loaded with coal and supplies. The fumigation was done by 2:30 a.m. The coaling ports were left open, probably in an attempt to air out the ship from the smell of the caustic materials used for the fumigation. Two hours later, the ship began listing and sunk. Most sailors on board were able to escape, but 6 men died. The unofficial explanation for the sinking was that the ship was resting on mud at low tide, and as the tide came back in, mud suction caused one side of the ship to rise more slowly than the other side, allowing water to come in through the open coal ports.  The photo at the top of this post shows the raising of the USS America on November 21, 1918.

1. A Fever of War: The Influenza Epidemic in the U.S. Army during World War I by Carol R. Byerly, page 8.

Welcome to Bridging the Past. We help genealogists connect to their colonial New England ancestors by sharing with them information about the lives of their ancestors. What did they eat? What did they wear? What was a typical day like? Did my ancestor fight in a war? What was life like for that ancestor, and for the loved ones he left at home? Why did they move? Was it part of a larger movement? By answering these questions, and many more, you can bring your ancestors to life and feel closer to them. We design lectures to answer these questions and give genealogists the tools and resources to personally connect with their ancestors by fleshing out the lives of their ancestors so they are more than names, dates and places on a piece of paper. View all posts by bridgingthepast

One thought on “A ship sinks due to the flu”